thingsmyexsaid
Yep . . .That IS what he said.

Hey there, reader. It’s Heather here, the creator of ThingsMyExSaid. Some of you have maybe  noticed some serious cartoon silence on my end here over the past few months. It wasn’t you, it was me. And I’m still taking some time. But I wanted to reach out and let you guys know some of the cool developments that are going on behind the scenes here at TMXS.

First of all- it speaks so much about you guys and the content  readers like you  have provided for this website, that despite my complete and utter lack of posting or publicizing, we’re still getting several hundred visitors a month! And the quotes keep coming! If you’ve submitted a quote in the last several months, just know it didn’t go unnoticed and it’s safely incubating in our giant quote database, faring much better than all the houseplants I’ve neglected over the years.

The main reason the website has been so quiet is we’ve been planning our official launch celebration   in New York City- more details to come on that later. Just expect some fun and wacky shenanigans coming up around the New Year.

In the meantime, because I am that needy,  I have a request: What are these two men are conversing about  in this 1950s romance comic? I invite you to post in the comments section below. 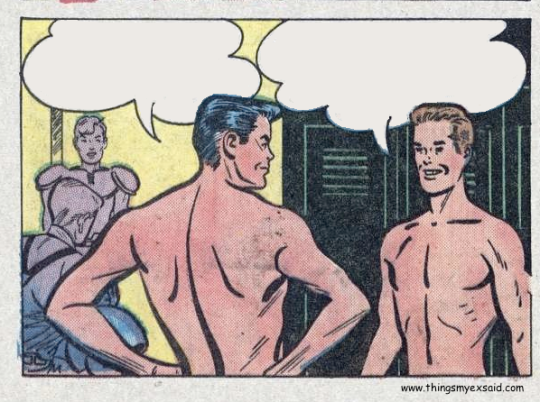 What are these men talking about? You decide!

I never said you were fat.

As I’m sure we all agree, many a relationship has been saved in semantics. 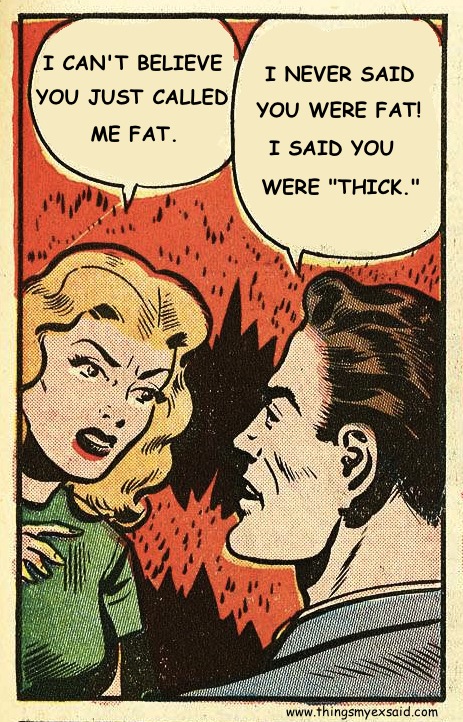 Really needed to get off. 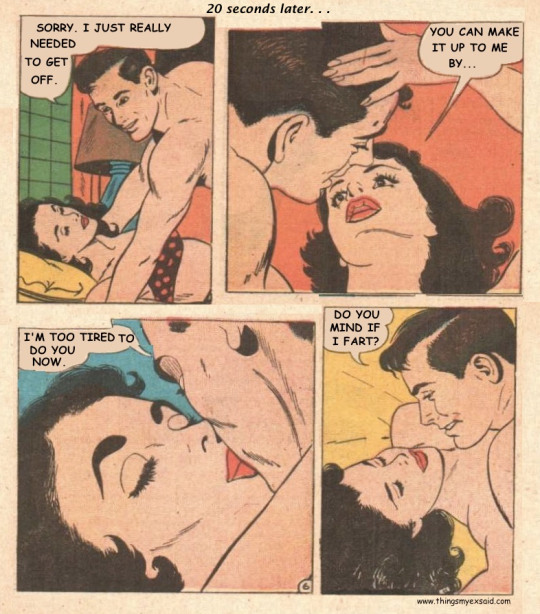 Nothing like skipping ahead to the “comfortably disillusioned” phase right away!

Today, we turn to one of the great movies of the late 20th century: 10 Things I Hate About You.

It’s important to know the difference between “like” and “love.” Or in this case, “strong feelings”… 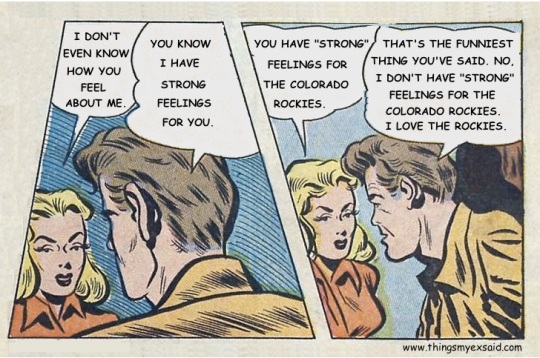 Well, at least he knew his priorities.

Everybody moves at their own pace when it comes to relationships. Sometimes, you fall into step with someone easily. Other times, it’s too fast or too slow. Are you waltzing while they’re doing the tango? Or the foxtrot?

In the case of this reader, here, I do have to agree that if you can’t tell after 5 months whether you love someone, the answer is probably no. 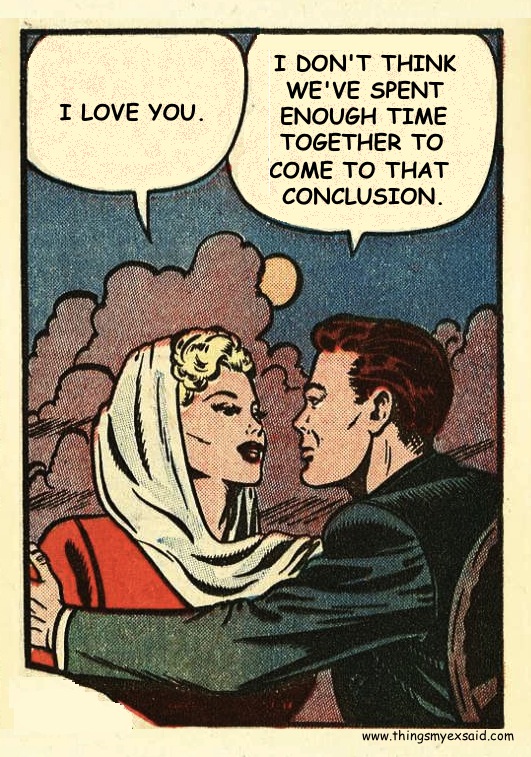 Looks like they had spent enough time together to come to the relationship’s conclusion.

Sometimes, we all need some space. 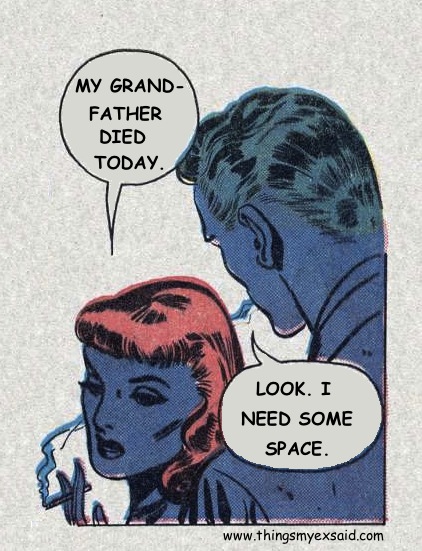 Sometimes, taking that space makes you an insensitive jerk.

VD Aftermath: What you can do

How was everyone’s Valentine’s Day? Sometimes, holidays or birthdays and the-like can be built up to the point where you end up feeling a let down. Like the disappointing birthday card in Cards Against Humanity. And then maybe you have a fight. Anybody have a V-Day like that? And then you inevitably try to talk to your significant other about what went wrong…

And sometimes, instead of a resolution, you come to an impasse like this: 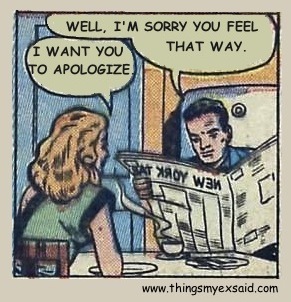 Nope. That is not a real apology. 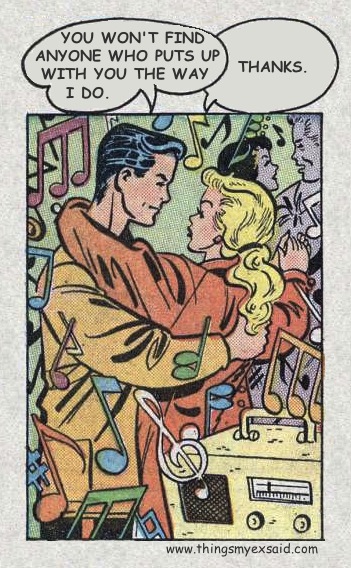 Ah, romance. Another year of love.

Starting to itch yet? VD is almost upon us! 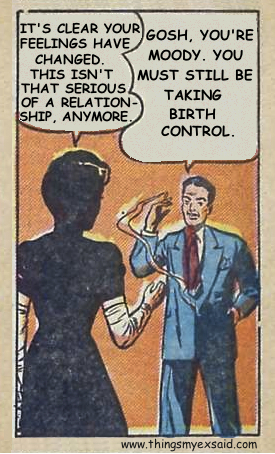 Batten down the hatches, lonely people! It’s going to be a stormy weekend.

Happy Tuesday! How many of you are city dwellers? The struggle is real. 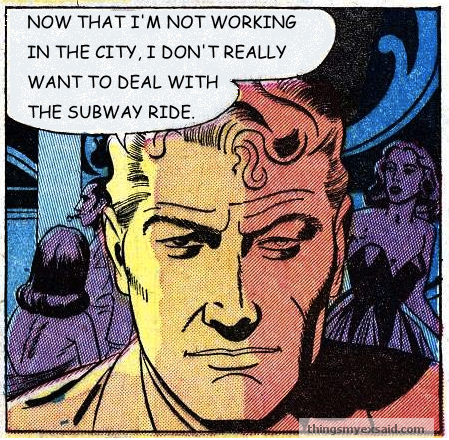 Dating outside your borough? Look at your life, look at your choices.

Got a Lousy Ex?