thingsmyexsaid
Yep . . .That IS what he said.

Here at ThingsMyExSaid, we support equality for same-sex relationships. Let’s be real, getting rejected by anyone sucks. Especially if she uses a lame excuse like this one.

If somebody would rather see a movie she’s already seen, with somebody she sees every single day, she’s just not that into you.

Today we round up our March Madness Mondays with one of the most disturbing submissions I’ve received. Not only is this totally f*cked up, but it’s timely, as well. As the Steubenville  rape case just wraps itself up, so many of us are wondering, “How can horrible acts like this still happen? How is it possible that women and girls are still seen time and again as less than a person?” The best answer I can muster, particularly after reading this quote, is look to the schools. You know, those factories of peer imitation and role-modeling.

Who doesn’t want this high school teacher taking his/her daughter under his wing?

At least this guy seems to be in some level of distress for being a total slimebag. Do we blame the movies, for casting pretty little–excuse me—Bright Young Things to prance around as leading ladies? Do we blame the students, for wearing cute little skirts and totally asking for it? Or do we blame (my preferred inclination) this asshole for being a creepy pervert? If you can’t get through a work day without mentally undressing your students, it’s time to find a new job.

Ordinarily, I try to let the quotes speak for themselves. But as the submissions keep coming in, and some of them are so incendiary, timely, and just upsetting, I may find it harder and harder (pun not intended) not to throw in my two cents about them. Your discussion is heartily encouraged.

It’s thirsty Thursday! Not thirsty? You may want a drink after you read the quote from this morning’s winner of a boyfriend. Oh wait, whoops, that’s ex boyfriend. I wonder why…

You’ve had it too easy.

March Madness Mondays continue with this condescending excuse for a break up!

thingsmyexsaid.com is looking for submissions! Got a crappy ex who had knack for saying the wrong thing? Submit a quote and we’ll turn it into a comic!

I think I love you.

Hurray! ThingsMyExSaid.com has been around for a whole month! And we’ve gotten 2500 hits! In honor of being around a whole month, today we’re posting the first submission of a quote said by a female. That’s right, girls can be jerks, too!

Keep you submissions coming, and we’ll post them up here! You can submit a quote right here.

Nothing like an act of sisterly charity to show you where you stand.

It’s the beginning of March Madness! And in honor of that, today’s quote celebrates the crazies. If someone ever says this to you in complete seriousness, get out. They’re totally f*cking creepy. 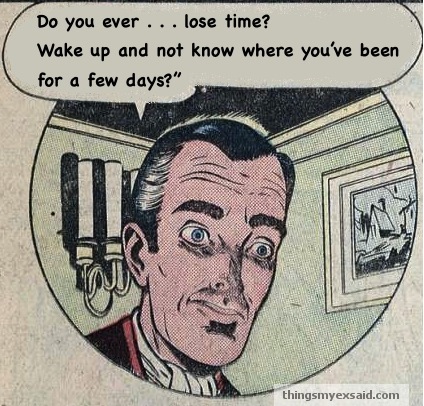 Got a Lousy Ex?